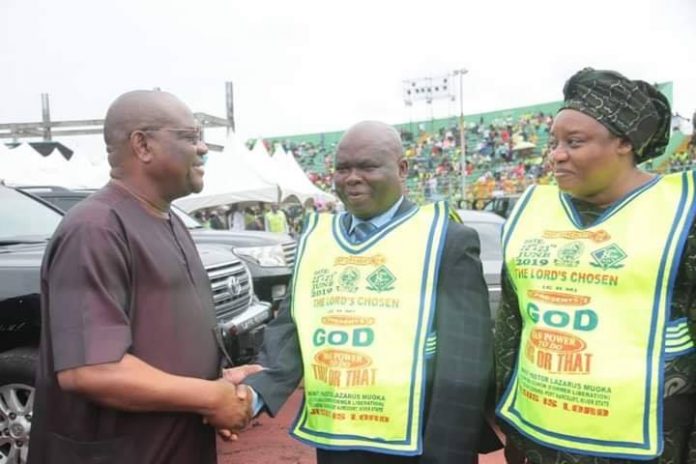 The statement by the Rivers State Governor, Nyesom Ezenwo Wike that Rivers is a Christian state has not gone down well with the Muslim community.

The governor had stated that his administration will continue to partner with the church for the development of the State while speaking on Sunday during the Lord’s Chosen Crusade with the theme: “God has the power to do this or that” at the Yakubu Gowon Stadium in Portharcourt.

He said the forces of darkness invaded the state and attempted to rob themandate of the people, but God stood firm.

“We saw forces, but the greater force,God Almighty came. With this crusade. Rivers State will be abundantly blessed.

“I repeat once again without apologies, Rivers State is a Christian State. That is why nobody can touch us. When it mattered most, the Christian community prayed and God heard your prayers.

Surprisingly, Wike may not have 1% of that. Amosun is likely having it, being an ally of Northern leaders, with the intention to permeate fulani banditry to the south west. Except a preparation for banditry, that level of gun storage cannot be for any other thing

Yeah, and it will continue to be for a long time. Nigerian Muslims will not make noise on Wike's witless declaration. I was even expecting CAN and NCEF to say something on this. They won't! Because they tacitly approve of Wike's Christian state theory.

Me: If a Northern Governor should declare his state as Islamic state, the whole media space will be filled with claim of Islamization. You will see press release from CAN and NCEF.

Islamization claim is a fraud.

There are more than 10 states in Northern Nigeria that have been declared Islamic states for almost 20 years & implement Islamic religious codes. Relax abeg

Do I believe Wike should have said so? No!!! But this your analogy misses by a country mile. https://t.co/iGRlBc8gcY

Wike said "Rivers is a Christian state, no apologies." Imagine it was Ganduje who said Kano is an Islamic state and no apologies.

Wike's declaration is wrong and we all need to condemn such a thing before it escalates out of proportion. Trust me sooner or later religious bigot like wike will declare his state a Muslim state and you will have every reason to cry Islamization for the fact you're quiet now.

Report: "Rivers is a Christian State" – Wike.
Twigerians: IF El-Rufai said that about Kaduna, twiville would erupts.
Report: Amosun submit 1000 AK47 & 4million bullets.
Twigerians: IF it was Wike, you people would say Niger Deltans are too violent.
Me: this "if" ehn pic.twitter.com/0rfMtiKjyh

Ask those northerners wailing about Wike's comment why many northern states use government funds to build mosques at ministries, public schools and Secretariats without also building churches.
Abi Nigeria is not a circular state ni?

If Wike declared the state as a Christian state so be it ,are u not in country when zamfara state governor adopted shariah law and celebrated like a https://t.co/k47lFWc8Hg shariah law for Christians?.dont place sentiments on certain issue bcox of your religion.i am a Muslim too

Just imagine a northern governor saying this. Just imagine what the headlines will be like. Just imagine how analysts will have a field day on the plot of ‘Islamization.’ https://t.co/CbvH82kxLS

Nothing funnier that Northerners getting angry at Wike for calling Rivers a Christian state when many states in the North apply actual Islamic laws…which makes them Muslim states.

But they cannot visits wike to discuss about he’s latest comment!!! CAN 410

12 States already passed laws adopting sharia. Wike should complete the declaration with an Executive Bill to his State Assembly. Will be nothing new.

Wike also had the balls to call a whole state that has many religions and tribes as a Christian state should tell you the kind of mess we have as a leaders. The drum of war is about to be beaten by these nicompols.

We il continue to partner with Churches- Gov Wike
Just imagine if Gov Elrufai Said he il partner with Mosques’ Am sure US-IRAN tension il take a break & watch over how Nigeria burns into flames, but let me Welcome u 2 Nigeria wia hypocrisy beclouds brains.. @Ayourb pic.twitter.com/TcUkiHLKu2

Rivers is a christian state according to Wike,let's just wait for El-rufai to call Kaduna a Muslim state and the Nigerian media would travel to insanity land. Hypocritical wailing media

They forgot Zamfara, Sokoto, and other 17 states using sharia law

For me, its good. We should just divide this country base on religion
Muslims-North
Christian-South pic.twitter.com/uWVzL2bFQ0

It is wrong for Governor Wike to call my state a Christian state. Rivers is secular, like Nigeria, regardless of the majority's religion.

It was ALSO wrong of Northern Governors & State Assemblies to enact Sharia. This is WORSE, because laws are stronger than words. https://t.co/ITMwaneG1L