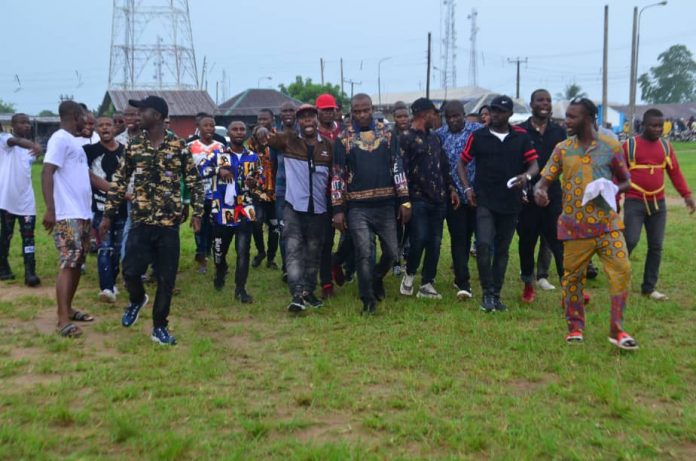 Hundreds of cultists in Ekpeye land accepted a peace deal and committed themselves to traditional oath on Thursday, June 20 in the most concerted effort yet to end years of insecurity in Ahoada East and Ahoada West Local Government Areas of Rivers State.

The cultists of the Iceland group led by Ukela Ochioma responsible for years of violent attacks, kidnapping and other vices in the area, led cultists from camps to take the traditional oath to shun every criminal act.

Ukelachi, code named Boss Noah was among those who signed an amnesty agreement proclaimed by Governor Nyesom Ezenwo Wike’s administration.

His followers, the main Iceland cult group in Ekpeye land, are expected to refrain from any act of criminality after the oath taking at Ula Ubie village, the ancestral home of the Ekpeye people.

In his reaction, the Ahoada Area Police Commander, ACP Ladi Suleman advised the repentant cultists not to go back to crime and warned that the police will leave no stone unturned to rid the area of criminal elements.

Suleman expressed happiness that at a time when other traditional rulers shy away from their responsibility of maintaining law and order in their domain, those in Ekpeye are in the forefront to secure peace through traditional means.

Speaking on behalf of the Ekpeye traditional rulers, King Felix Enene Otuwarikpo, Eze Igbu Upata Kingdom III who was the architect and coordinator of the renunciation process by the cultists said the essence “is to build a greater and peaceful Ekpeye.”

He assured that those who genuinely repented would be forgiven, while he urged those who are yet to commit to the oath to do so on or before the midnight of Friday, 28 June, 2019 because the law enforcement agencies will be “swift and decisive against cultists and others involve in criminal acts. I urge others who are yet to do so to also disarm.”

Hon. Hope Ikiriko, Chairman of Ahoada West Local Government Area who was present, said he was challenged by the boldness of the repentant cultists and assured to assist reintegrating them into the society.

His Ahoada East counterpart, Hon. Ben Eke promised to train them in livelihood skills and to grant them soft loans, stressing however that he will meet with the leaders of the repentant cultists to have their input into the rehabilitation and reorientation programme.

Ochioma who spoke for the group, said “it is not proper for us to live in the bush. We were not enjoying our lives. So I am happy today,” noting regretfully that “it is not easy to stop but the government should assist the boys, train us and give us work, not to just give us money. Government should train us, give us skills to enable our full reintegration.”

Eyewitnesses fear that they will return to the bush unless those who have taken the traditional oath are meaningfully engaged.

Before the start of the renunciation ceremony, the repentant cultists paraded the streets of Ahoada, singing Christian songs and asked for forgiveness.