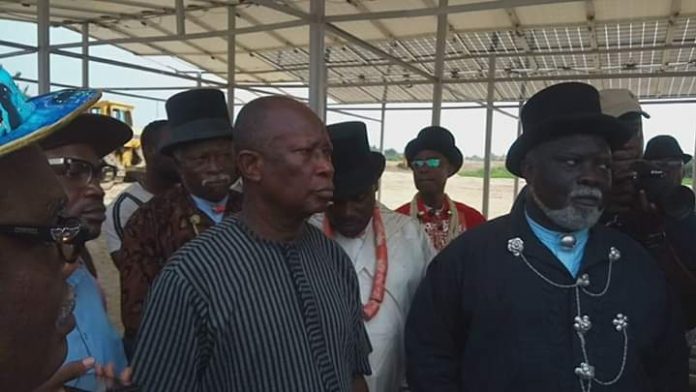 Three communities of Belema, Ngeje and Offoin-Ama in Akuku-Toru Council of Rivers State, on Tuesday, staged a protest in Port Harcourt against the involvement of Nyesom Wike in the communities’ confrontations with Shell Petroleum Development Company (SPDC) over the OML 25 oilfield.

The OML which produces 44 000 barrels of oil per day and 100 000 cubic centimetres of gas daily was shut down in August 2017 by the communities’ women who accused SPDC of negligence.

They said they preferred an indigenous oil firm, Belemaoil, to take over the oil field from SPDC.

Governor Nyesom Wike last week during a meeting with stakeholders had given the communities 7 days to settle the issues and reopen the facilities.

But while displaying placards with different inscriptions like ‘40 years of Shell, no employment, no water’, ‘We want peace’, ‘Rivers State government, don’t cause crisis in Belema community’, ‘OML 25 is not under Rivers State Legislative List’ and ‘OML 25 is before federal government for negotiation’, the protesters matched through the streets of Port Harcourt.

He described SPDC’s action as inhuman and called on the Pan-Niger Delta Forum (PANDEF), other oil-producing communities and the federal government to come to their aid to avoid crisis.

“We remain resolute, united and committed to the dream of economic liberalisation, education of our youth, emancipation from the shackles of slave masters who have destroyed our aquatic livelihood with their oil pollution and wanting to sell their assets and hand over to an unknown new slave master.

“The federal government should know that Shell is now using the Rivers State government against its host communities they refused to develop for 40 years, now they claimed to have another 20 years renewal to enslave us. We are saying: no more Shell in our communities.”

Spokesman of PANDEF, Anabs Sara-Igbe, said what was playing out in OML 25 communities was a new phase of the Niger Delta struggle, condemning Shell’s intimidation and government’s threat to re-open the flow station