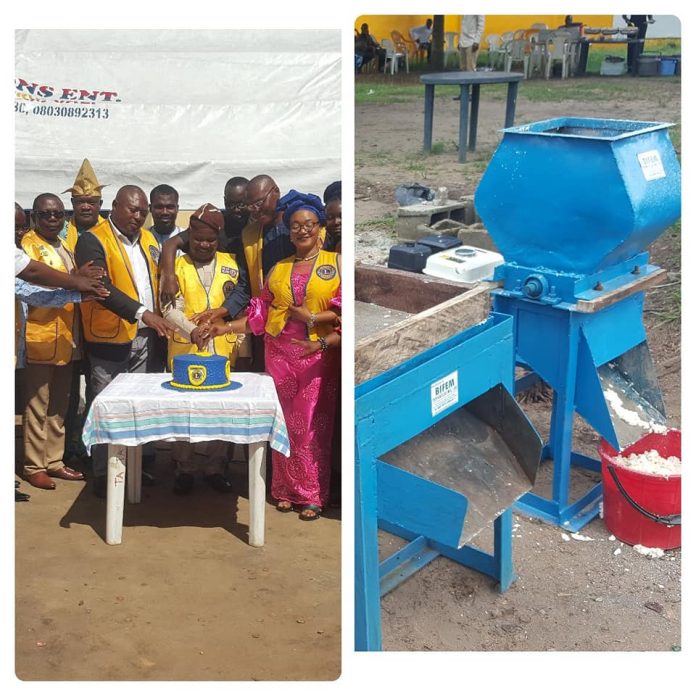 Presenting the machines to representatives of Etim Osam Community, on 23rd, June 2019, at Lions Park, Marian, Calabar, the President of the Calabar Akin Lions Club, Lion (Engr.) Joseph Abiodun said the humanitarian gesture is in fulfilment of his administration’s promise, upon inauguration a year ago, to donate such a plant to one of the Akin Communities.

Lion Abiodun further stated that apart from creating employment and generating revenue to the Community, the availability of the cassava processing facility will put an end to ordeals of residents of Etim Osam travelling to neighbouring communities in order to process their cassava into finished products, adding that the new development will greatly improve the quality of garri production in the Community and also impact on the living standards of the people.

The President charged the benefitting Community to make judicious use of the facility to the overall good of the Etim Osam people, in order to attract more of such gestures in the future.

He thanked the Ntoe of Akim Qua and his cabinet for providing a befitting place in the Community to house the equipment.

The over N500, 000.00 set of equipment, according to the President, consist of a stainless steel cassava grater with a petrol-powered engine; cassava de-watering press; stainless steel manual sifter; and communal tray fryer.

The President further enumerated the achievements in the year under review to include the 10th years milestone of the Calabar-Akin Lions Club; Membership growth of plus three; Youth empowerment, through skill acquisition and training; participation in Zonal, Regional, District and Multiple Districts activities; zero debts; dynamic youth wing (Calabar Akin Leo Club); and zero deaths.

He acknowledged God for the 10-years feat and the enabling grace to have been able to touch lives and achieved a lot in a space of one year. He also thanked the District Governor, Region and Zone Chairpersons, Board of Directors and the entire members of the Calabar Akin Lions Family for their support, saying it was a rare privilege to have served them in such capacity.

Receiving the equipment, the representative of Etim Osam Community, Elder Eta Edim Ekong, thanked the Calabar Akin Lions Club for such a life-enhancing gesture and promised to make good use of the facility for the betterment of the people.