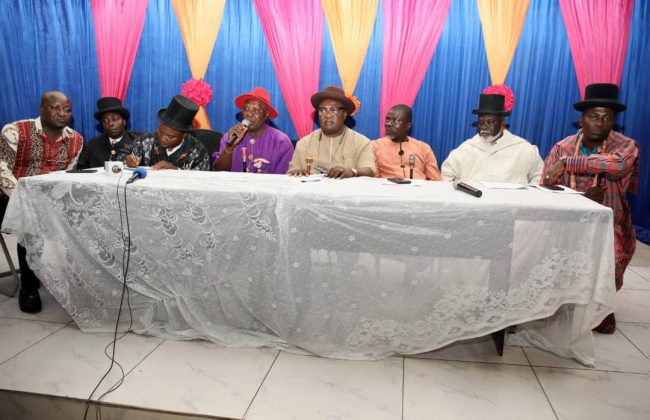 Gov Nyesom Wike of Rivers State has summoned a meeting in Government House on Saturday, June 22, 2019, to discuss the protracted dispute over the shutdown Oil Mining License (OML) 25, but the entire leadership in the area said they will not participate.

They addressed a press conference in Port Harcourt where they gave their reasons and asked the governor to cancel the meeting. This means the N700Bn so far lost in OML 25 shutdown may increase.

Nigeria is said to have lost over N700Bn since the shutdown of the Kula oil field near the Atlantic Ocean (Oil Mining License 25) in Rivers State more than one year ago, but the host communities have given conditions for resolution of the stand-off.

This is as the leaders of the host communities have rejected a meeting called in Rivers State Government House in Port Harcourt for the dispute today June 22, 2019, on the instance of the state governor, Nyesom Wike.

Instead, the monarch and chiefs of the three host communities have insisted that Shell Petroleum Development Company (SPDC) must lead the Nigeria National Petroleum Corporation (NNPC) to Kula and point out what projects they have done with the $300m alleged to have been spent on Kula since oil started in the community over 30 years ago.

Disagreements over community development benefits had led to the Kula communities demanding that the oilfield be ceded to an indigenous oil company on ground of total marginalization. The community people especially women shut down the oil field in early 2018 and it has remained shut, leading to over N700Bn loss, according to Igo Weli, spokesperson for SPDC, in May 2019.

Governor Wike, who last week warned that oil facilities must not be shut down in the state anymore is said to have intervened and summoned a meeting of stakeholders for Saturday, June 22, in Government House, but this equally seems to brew fresh crisis. The new turn of crisis may put Nigeria at higher risk of loss of oil revenue.

Addressing a press conference at the Ernest Ikoli Press Centre on Moscow Road in Port Harcourt, a spokesman of the Kula community, Alabo Fiala Okoye-Davies, said the matter of Kula oilfield has since been taken over by the presidency (President Muhammadu Buhari) who he said handed it to the vice president who in turn allegedly handed it to the NNPC.

The Alabo, an engineer, surrounded by the king and other chiefs and heads of units in the oilfield, said since signing two memoranda in 2005 and 2014, nothing has been given to the host communities.

There is no gainsaying that the communities have not benefited from any meaningful development in terms of healthcare delivery, education, economic empowerment, etc, after over 38 years of oil exploration in the area since the King of Oko Royal House and Belema community gave the parcel of land to SPDC in 1980.

He said the key players and rightful leaders of the communities were not invited to the said meeting but that persons invited for the meeting were not members of the host communities of OML 25.

One Kula elder, Hope Opusingi, who said he was the rightful king, had early in the week commended SPDC on community development and praised the state governor for being on the right path, but the Kula monarchs and chiefs condemned the man, saying a court ruling had since resolved who the rightful monarch were.

Okoye-Davis said the decision arrived at with the NNPC, NAPIMS, Security agencies, SPDC, PANDEF, and host communities was to constitute a joint investigation visit to Belema community to be organized by SPDC and that this is yet to be carried out.

He mentioned the rightful host communities of OML-25 as Belema, Offoin-Ama, and Ngeje, wondering why Ngeje was not included in the proposed meeting whereas a self-claimed monarch was included. He said the invitation seemed to reflect political lines in wards 15, 16, and Abonnema in Akuku-Toru local council area of the state.

He said the oil giant once walked out of the peace meeting in Abuja to the anger of partners, and that unless the company points out where it spent the alleged $300m community vote, there would be no progress in negotiations.

King Bourdillon Ekine Oko, the 28th Oko, said “If you want to stop fight, quell the quarrel. We guaranteed the security of any FG team with Shell ready to come to Kula to show the projects done.”

He said a local council boss invaded the place with 18 boats full of thugs on May 18, 2019, to force the oilfield open, but warned that such actions would cause more trouble. He said as long as the oilfield is shut, there would be no violence in the area, but that provocation could cause crisis.

He described Kula as the most peaceful community in Rivers State but insisted that the people the Rivers State government invited to the Saturday meeting are mostly non-stakeholders in OML-25.

“If the governor wants peace, he should send a team to participate in NNPC meetings in Abuja with SPDC and Kula chiefs and not start another meeting in the state. How can we descend from the federal level of attention and the presidency to state level?”

He rejected actions that may look like politicizing the Kula matter and said the people of the area know the real owners of the land and that Gov Wike has the capacity to use intelligence to know the truth of the matter.

A prominent chief in Kula, Anabs Sara-Igbe, said since the matter is before the presidency, there would not be a meeting in Port Harcourt.

“We believe in peace but the Rivers State government has not been able to make the oil giant to comply with previous peace resolutions since the Peter Odili era through the Chibuike Rotimi Amaechi time to now. Oil is in the exclusive list and no state can enforce anything. Let sleeping dogs lie.”

A youth leader, Sukubo Sara-Igbe Sukubo, president of the National Council of Youths, told journalists on the sideline that the youths want peace but that the state should allow the FG to conclude the matter.

On this, it seems Nigeria may continue to lose billions of Naira in Kula except the dispute is given accelerated attention. It is not clear if the Saturday meeting will still hold in Government House in Port Harcourt and how the host governor would treat the objection of the host community leaders.