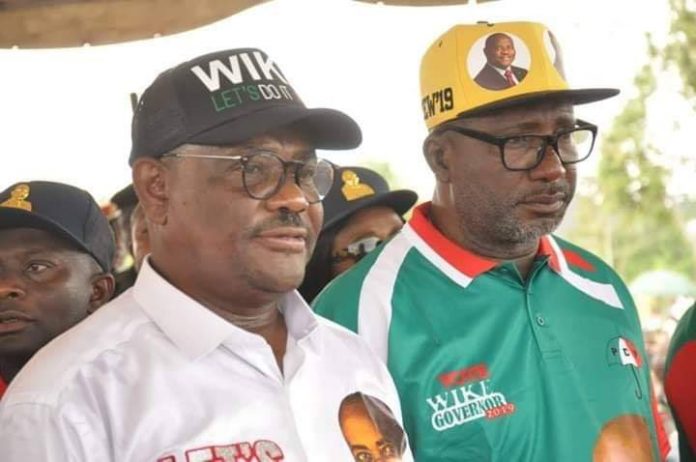 Bro. Felix Obuah, the chairman of the Peoples Democratic Party, PDP, in Rivers State has denied claims by the Accord Party governorship candidate, Chief Dumo Lulu-Briggs, that his campaign posters were being destroyed by members of the PDP in the State.

Obuah while reacting to Dumo Lulu-Briggs’ comments on Silverbird 93.7 FM live radio programme, View Point, on Saturday, said the accusation against the PDP is false, misleading and a fragment of Lulu-Briggs’ imagination.

Obuah explained that he was not surprised at such vituperations from Dumo Lulu-Briggs, as he was apparently frustrated, having lost every elections he had contested.

Bro Obuah described Dumo Lulu-Briggs as a joker, who can not win election in Rivers.

“Dumo Lulu-Briggs is a serial election loser. He thinks it is the All Progressives Congress, APC where he was incubated and midwifed, where hooliganism is a culture”, Bro. Obuah said.

Speaking further, Obuah stated that the PDP is a body of matured and civilized minds who would not tamper with the campaign posters of political opponents, talk less of the likes of Dumo Lulu Briggs, who can’t win his polling unit election in Rivers State.

“We in the PDP are civil, matured and responsible, and would not belittle ourselves by tampering with other political party candidates’ posters.

“In his wild imagination, he forgets that Rivers State is not Lagos, Kaduna, Ekiti, Edo, Imo and all the APC states where billboards and posters of the PDP candidates are destroyed at will”, Bro. Obuah said.

The Rivers PDP Chairman also slammed Dumo Lulu-Briggs following what he said were false statistical index on employment, poverty and insecurity in the State, stressing that the Accord Party Guber candidate would continue to lose elections as he knows little or nothing about his Local Government Area and the State.

Governor Wike according to Bro Obuah has done well, and Rivers people would vote massively for him and all the PDP candidates in the coming elections.

“How can he claim to run election when he doesn’t have campaign offices in any of the 23 Local Government Areas of Rivers State? Does he know that the Accord Party does not have candidates in all the elective offices for the forthcoming general elections?

“How can a candidate like Dumo boast of wining election in Rivers State, with what?

” Politics is a game of number, and Dumo does not have the number, Bro Obuah said.

“Let Dumo Lulu-Briggs understand that the PDP is recognised in all the 4,442 Electoral Units and has offices in the 319 Wards in the State. PDP also has campaign offices in all the Chapters and local government areas in the State”, he said, adding that Lulu-Briggs cannot run election for the exalted office of Governor of Rivers State, because, according to him, he does not even know the number of Wards or Political Units in the state”