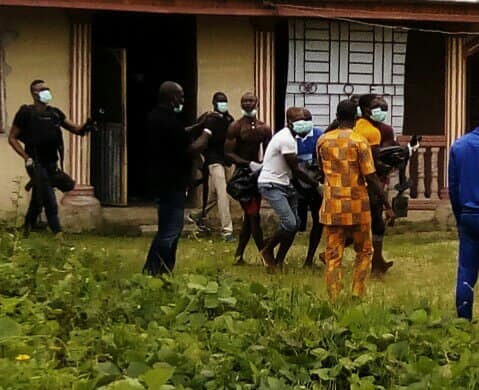 Police in Rivers State, on Tuesday, exhumed the corpse of one Charles Inedukoba Tyger, a native of Buguma in Asari-Toru local government of Rivers State following months of disappearance.

Mr Charlse was last seen on January 26, 2019, after answering a call from his wife, Ajemina George Douglas from the Omubo group of houses who had invited him to meet her at Abalama, the outskirt of the town.

Luckily, he had informed the people close to him before he responded to her call that she was the one calling him to meet up.

After his sudden disappearance, Ajemina denied having a hand in the disappearance leading to police intervention in the matter.

But on Tuesday, she confessed to killing him and paying three of her business partners to bury him at the Abalama Sandfield.

Theportcitynews gathered from sources that the couple has been having issues over accusation of infidelity with Ajemina accusing him of impregnating another girl outside their union.

Sources said she came into their marriage with kids from her previous relationship.

Nnamdi Omoni, the Rivers State Police Command’s Public Relations Officer to did not respond to our requests for comments.

However, it was gathered that the whole town was thrown into a state of mourning following the revelation.