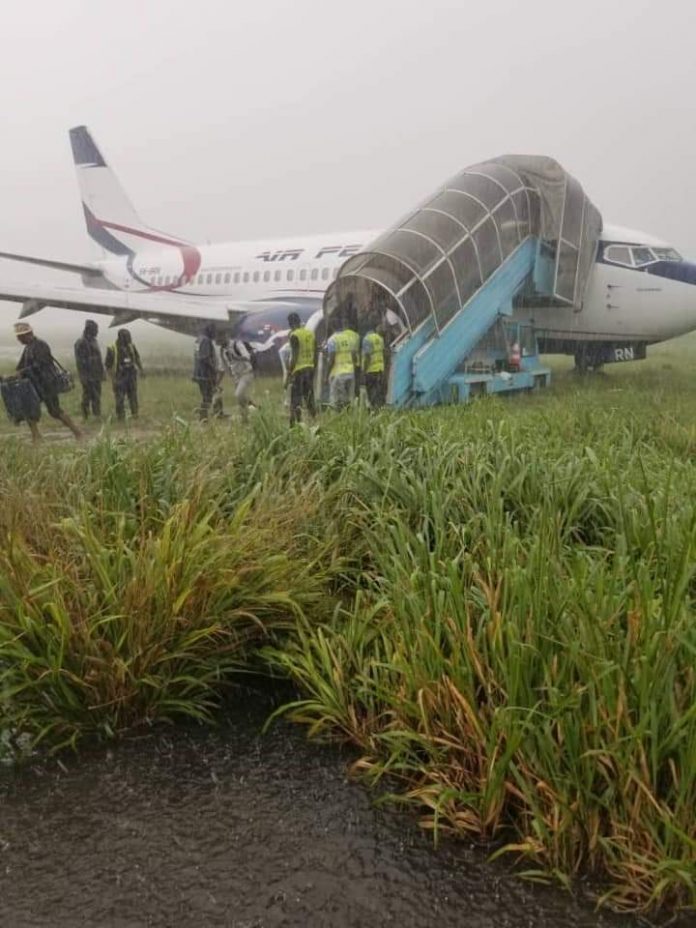 An Air Peace Flight P47291 from Abuja to Port Harcourt on skidded off the runway at the Port Harcourt Airport, Omagwa, on Saturday, while landing due to downpour.

Theportcitynews gathered that there was no casualty recorded in the incident which occurred at 3.42 p.m.

She said although the the Boeing 737-500 aircraft skidded off the runway, the pilot was able to stop the aircraft, adding that in spite of the rain, the undercarriage of the aircraft did not sink into the soil.

The affected aircraft was immediately grounded for inspection by the aviation authorities.

However, the Chief Operating Officer of Air Peace, Mrs Oluwatoyin Olajide, attributed the incident to the flooding of the runway.

According to her: “We confirm that Air Peace Flight Flight P47291 Abuja-Port Harcourt had a runway excursion upon landing at the Port Harcourt International Airport on June 22 due to downpour.

” Our professional crew quickly recovered within seconds of the incident and the aircraft was successfully normalised.

“Our esteemed passengers on board the flight were calm during the incident and disembarked normally.

“Our teams of experts and the authorities are currently reviewing the incident and we will give our cooperation for a thorough exercise.

“We apologise to our esteemed passengers for the inconvenience caused them and wish to assure them that we will continue to prioritise their safety in all our operations.”