Oluwatosin Ajibade, Nigerian Singer and entrepreneur better known by his stage name Mr Eazi may have just won the award for “the most romantic boyfriend.”

Following the grand style in which he celebrated his actress, fashion entrepreneur and billionaire’s daughter girlfriend, Temi Otedola, on the occasion of her 25th birthday, which was on the 20th of March.

In the video making rounds on social media, it appears that the singer took his girlfriend to a private Island for breakfast. 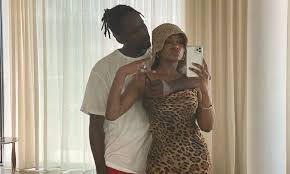 However, it seems as though the special treat isn’t over yet as the singer continues to shower his girlfriend, Temi Otedola, with more special treats.

Temi Otedola, via her Instagram, shared videos of an exquisite breakfast in a very fancy 5-star hotel with an ocean view.

The couple has a podcast called ‘ How Far’ where they talk about their relationship and the dos and don’ts in a relationship.

Port Harcourt residents complain of harassment by Police over curfew

Police arrest suspects over murder of policeman in Imo