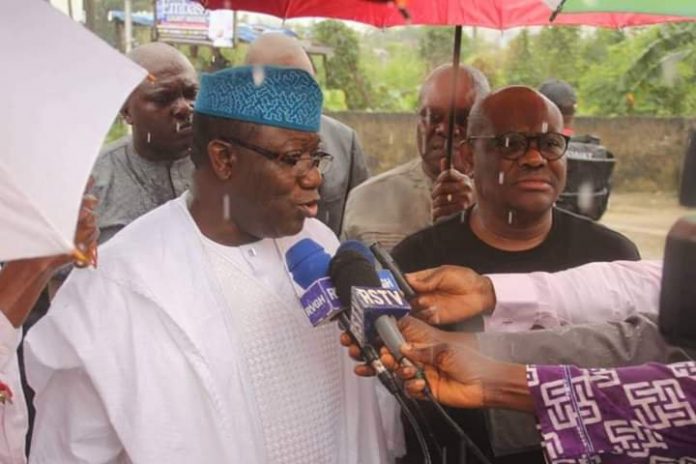 Fayemi who was conducted around the area by Wike at Rainbow Town said the entire controversy was a storm in a tea cup and unnecessary.

“With what I have seen I cannot see any evidence of any building that has been demolished here.

“If you are somebody who wants a place of worship, you should find a way to oblige them. I know within your capacity, it will be possible to find a place for them.

“From what I have seen here, I think it is a storm in a tea Cup. There is nothing to warrant this kind of media hype that has been given to it.” he said.

“If they cannot have this place that is contention and they have gone to court and you have respected their right to go to court, if they want to come back and seek a request to have another place, I plead that His Excellency should oblige them.

“If they are willing and prepared to have their place of worship elsewhere, that shouldn’t be too much of a request. It is important for us to promote harmony, rather than discord,”

Governor Wike explained that there is no way he would see a religious place and order the Ministry of Urban Development to demolish it, adding” Assuming that there is even a Mosque and that government doesn’t want it at that location, we will invite them and say look, we don’t want a Mosque there, can we find you an alternative place, but there was no Mosque. I don’t know why people should make politics out of the issue. It’s not important”