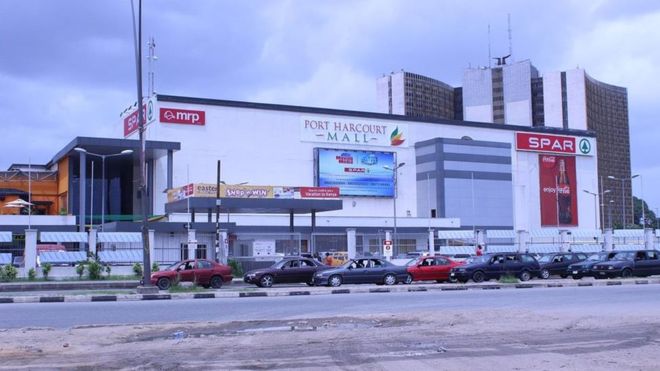 One week after an explosion rocked the busiest shopping centre and leisure mall in Port Harcourt, business activities seem to have slowed down at the ever-busy Spar mall in the state.

Shops at the mall are fully open and functional but the customers and fun seekers who literally stroll around the shopping mall are no more trickling in.

TPCN reporter visited the scene of the incident in the company of some delegation of The National Union of shops and Distributive Employees (NUSDE) with other Journalists, TV, print and electronic media for on the spots assessment as the union called on the management of spar/park n shop to fly the victims of the Wednesday Gas explosion abroad for proper medical care. The union President, Innocent Jaja said “I am not sure if the victims of the explosion were the Indians and Lebanese they would take them to UPTH for treatment. They would have probably flown them abroad. I am not saying that UPTH is not good but I am Calling for Maximum care to be given to the affected victims”

He said that union has been to UPTH to visit the victims but were denied access due to the Severity of the cases.

“We were told that visitors are not allowed into the ICU especially at critical times like this, we understood with them and respected their policy but urging them to give them Necessary attention.

The president of NUSDE after touring the facility of Spar said ‘’ members of the Union and united labour Congress paid a visit to Spar facilities to ascertain the true position of the incident.”

He said the Union will monitor the progress made by the management of SPAR to forestall future occurrence; he assured that the safety of workers at spar will be closely monitored to ensure that workers’ rights are protected and that they have a conducive environment to carry on with work.

Also speaking to newsmen at the visit, the first Vice Chairman of United Labour Congress (ULC) INNOCENT LORD-DOUGLAS said the union will ensure that SPAR management does the right things by first footing the Bills of the injured workers and where they fail, The union will not hesitate to use all the available tools to get Justice to the Victims.

For their part, the manager of Port Harcourt Malls Chioma Okeke said the incident was as a result of an error by one of the Technicians working on the facility.

She said efforts are in place to ensure that the safety standard of the building will not suffer such incident in future.

She said business was back to normal almost immediately and hands are on deck to ensure they give their best to serve the public.