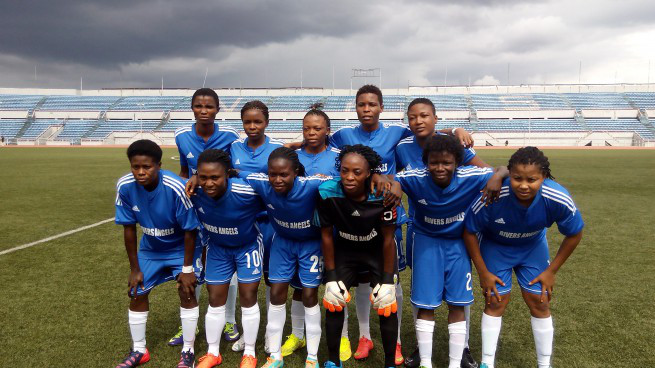 Defending champions of the Women’s Aiteo Cup, Rivers Angels have arrived Makurdi as they begin this season’s campaign against Adamawa Queens on June 20 at the Aper Aku Stadium.

The eight-time Cup champions are hoping to set yet another record in the country’s oldest football competition.

Upon arrival, Team Manager of Rivers Angels, Matilda Oyiloha Michael said her side is in Makurdi for the win.

“We coming to Makurdi is to begin our title defence,” Oyiloha said

“This stage of the competition is a very crucial one and we’ve really worked hard.

“We’ve had a couple of friendly games with some club sides since we resumed training in January and it’s time to get into action,” she added.

The last time both sides met was in a Nigeria Women Football League game on June 5, 2016, at the Fofure stadium and it ended goalless.

In the meantime, the Team Manager of the Jewel of Rivers frowned at a report that was circulated on social media yesterday stating that the Ministry of Sports had refused to make funds available for her side to embark on their trip to Makurdi.

Mrs Oyiloha while condemning the source of the report said it was only a move from the team’s detractors to destabilize her side.

The Rivers Angels TM said they’ve always gotten maximum support and attention from the State Government and the Ministry of Sports as well.

“That report was simply from detractors because I can’t say the team is in need of any money,” Oyiloha stated.

“Despite the short notice of this encounter, the Ministry of Sports still made money available for the team to go and execute this game”