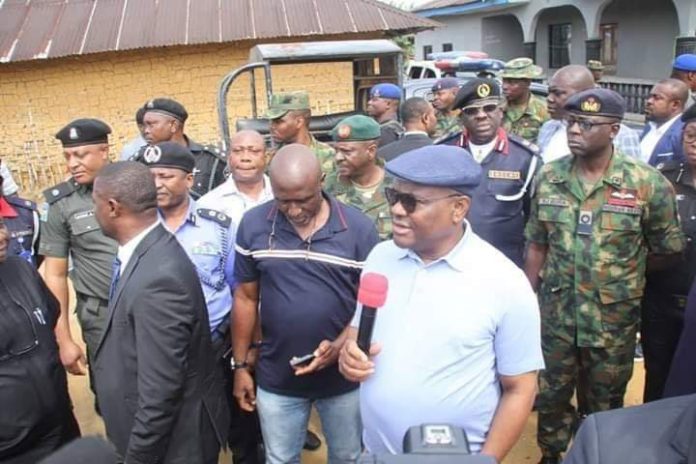 Wike who led the State Security Service Commanders to Kono-Boue and Kereken-Boue Towns in Khana Local Government Area, Governor Wike said that the security agencies have been mobilised to go after the criminal cultists operating in parts of Ogoniland.

He said: “We will do everything possible to make sure that those involved in these criminal cult activities don’t go free.

“You have to cooperate with us to get the killers. Those who have perpetrated these crimes are known to community members. No armed robber operates in a place without local support . Therefore, support us with credible information.

“I feel so sad that these cultists have killed our people and displaced some communities in the area. We have taken measures to restore peace “, he said.

He said that the State Security Council has adopted new strategies to build the security framework in communities troubled by cultists.

He said: “Tell your people to come back. I have come here with the security service Commanders to reassure you that we are doing everything possible to restore peace.

Governor Wike charged parents to monitor their children . He said communities must take measures to discourage youths from becoming cultists.

The Governor said that the State Government will support displaced communities and families of victims of the cult-related attacks in Ogoniland.

He assured the leaders of the area that the Rivers State Government will complete the road abandoned by the Niger Delta Development Commission.

Governor Wike announced that the State Government would build a major Police station in the troubled area to secure the people.